Gunnr is a female Wildclaw and is the younger sister of Valkyire, the leader of Clan Ignis.

She is the Clan's Forgemaster and makes all of their weapons and armour. Gunnr is accredited with being quite skilled in her art; after all, she spent a majority of her youth in the Molten Scar learning.

Some believe that she may be the next leader of the Clan.

Gunnr is a very sleek individual; she appears smaller and less bulky than her sister. This is attributed to her vastly different upbringing and general lifestyle. It is notable, however, that she has quite strong shoulders and wings as both play an important part in her role as a Forgemaster. She is strong in different ways to her sister essentially. While Valkyrie might be much larger and bulkier, Gunnr doesn't need to be as she doesn't require such adaptions. She has instead retained a more average appearance despite some saying she is on the small side for a Wildclaw.

Like her sister, and presumably their other siblings, Gunnr has warm, earthy colours. She has jaguar markings that are a dusty brown, while her wings are a darker, and slightly warmer hue of brown. The female Wildclaw also has dark red stripes adorning her back and wingtips. The most interesting aspect of her appearance though would be her dark orange eyes. It isn't clear why Gunnr has darker eyes than her sister, but, some believe it might be due to her having lived longer in her home element and thus retaining more of those natural traits. It is also thought that Gunnr might be more magically adept in the element of Fire, but, that remains unclear.

The female Wildclaw adorns herself in heavy, protective apparel to, well, protect herself from her work. Gunnr wears older versions of the armour she makes normally, alongside one or two newer, nicer looking pieces too. The latter is mainly so that she is actually protected to a degree. She is normally never seen without her black wolf cape; something she picked up in her travels. No one is entirely sure why she wears it, but, she does and that is that. Probably her favourite piece of apparel that she generally wears is her red scarf, which was a gift from Valkyrie. Gunnr realises that while it sounds silly, the scarf represents a lot between the two sisters. She believes it means that Valkyrie accepts that she is her sister and that they won't ever part again.

The younger, much younger, sister of Valkyire of whom she managed to track down after years of questions. Gunnr remained in her home element at the Molten Scar for years before she started to wonder where some of her family were. It seemed that her curiosity would drag her around the Globe to find her kin. She started tracking the stories from Dragonhome about a female Wildclaw who had rebelled against a BeastClans Arena and won. This piqued the young dragon's interest and decided to head into the heart of the Shattered Plain.

Gunnr would come to find her eldest sister, and almost be killed in the process. The young Wildclaw had the unlucky chance to meet the beast known as Erikr, and was luckily saved by Valkyrie who managed to scare away the hybrid creature. At long last, the two met and Gunnr explained everything to her eldest sister. The two decided to stay together and Gunnr was welcomed into her sister's home, Clan Ignis.

There, the young Wildclaw would begin to prosper. As she had stayed in the Molten Scar for most of her early life, Gunnr was a natural forgemaster and has been tasked with providing Clan Ignis with weapons and armour. She hopes to make her sister proud and trains under her wing to learn the ropes of a world she would never see the same way again. Many believe that Gunnr will become the next leader of Clan Ignis. 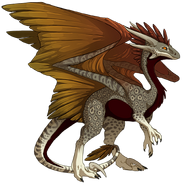 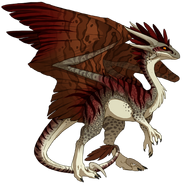 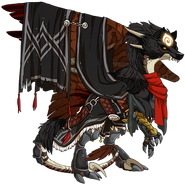 Current Appearance
Add a photo to this gallery

made by guzzoleen (#161962)
Add a photo to this gallery
Retrieved from "https://the-lorebrary.fandom.com/wiki/Gunnr_(Clan_Ignis)?oldid=12922"
Community content is available under CC-BY-SA unless otherwise noted.