The Complete Library of All the Clans and Lairs of Sornieth Wikia
Register
Don't have an account?
Sign In
Advertisement

Highland Gem Guardian who carries a Lightning gem which contains the essence of thunder-hail. He follows her around, and helps her with her everyday chores s the Leader off Blue Lightning.

Sting was one of the minor gods, forming in a later battle between the Stormcatcher and the Icewarden. As the Stormcatcher beat back a particularly harsh flurry of needle-sharp ice with a bolt of lightning, the magic animating it and the lightning’s power formed an unusual storm, fueled by magic. Many minor gods were created in this fight by several lances of lightning that left behind parts large enough for gods to be created, but not many were as powerful as Sparkforger, who was created in the eye of the storm, which funneled magic towards the center. These gods either escaped, joined the Icewarden or the Stormcatcher, or dissolved back into the storm.

The sky was an ugly shade of yellow-black. A tall funnel cloud swirled, and below, the Stormcatcher and the Icewarden clawed and hurled ice and storm together. The funnel alternately flashed up bright blue white and cyan as the gods fought using their magic. Stormcatcher pulled down a gigantic shaft of electricity from the sky and Harold it at the ice garden and hurled it at the ice warden. It left behind small flurries of electricity. They grew in size, and began to change into actual shapes.

where am i? What’s happening? I want to join in. A spark thought, and began to grow as storm magic wrapped around her. She burned with excitement. Sparks began flying off her, then she bwgan to take a form. She watched Stormcatcher, thought for a moment, then grew into a Ridgeback-like dragoness, with gleaming eldritch scales that rippled in the stormlight like spilled oil, long teal wings that shimmered like an ocean at dawn, glowing blue runes spelling words of ancient power on her extremities, obsidian claws and eyes that glowed with power. Arcs of electricity coursed along her body, and a halo of it hummed, circling her horns.

She looked up, blue eyes narrowing to slits, and smiled as she flicked her talons at the sky above. A second later, thunder loud enough to break ice cracked, and she slashed her talons through the air, directing a bolt of lightning into the Icewarden’s eyes just as he tried to attack Stormcatcher.

Stormcatcher looked up at her and bellowed, “hit him again!”

Together, they fought off an iceberg that the Icewarden created out of thin air above their heads, fried a storm of thin ice discs, fended off an annoying new god who was attacking the Stormcatcher’s tail, and watched as the new gods took sides.

Sparkforger is an energetic, charming and charismatic leader, but she hides something: she doesn’t feel emotion in the way normal dragons do. She is sometimes accused of being cruel, cold-blooded, and immoral in the extreme, but it’s not a personality flaw; she simply feels feels no attachment to them that’s deep, and sees their relationships as mildly nauseating. She is very intelligent, courageous, and shrewd, like Star, never ceasing to pragmatically examine and analyze a situation. 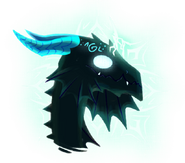 Sting as a Guardian by Metalica. Thank you!

Sting by Fifiinart. This is beautiful!
Community content is available under CC-BY-SA unless otherwise noted.
Advertisement