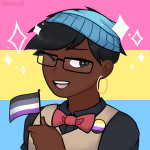 Hello! I'm FlametheCharizard!
About Me

The Empire of the Moonlit Waves of the Tidelord

"I say that our Star King is Rashard, son of Baldr the Nightwing and Ragna the White, prince of the Vanir, true king of the Sun Isle, and only he will bring us peace!" - Catori

"You said 'Hey, sparkling teeth, I totally live three of your claws but not the others, and I wish your nose was a herring so I could eat it, and also your wings sound like sharks snoring.'" - Riptide

"This is not going to be our life, Luna. I won't spend the next hundred years writing fruitless letters. Father's way, obeying the system, hasn't worked. So we'll find another. Or we'll burn it all down." - Blue

"Yes! But no. The HiveWings have also been lied to, and brainwashed and tricked. The queen is the problem. you have to fight her, not the whole tribe. I mean, we do. We have to stop her. - Blue

My Own Quotes from OCs

Favorite Pairings and Why

I think that Toskil and Istra would be an adorable couple! Both of them lost their only remaining family members (Toskil lost his mother and Istra lost her brother) so I think they could bond over this.

This is a wingsister ship. It could start out as a "hate at first sight/become good friends" pairing. Istra would still be peeved at the Aesir for the death of her parents, while Ilse is trying to fit in the Silver Isles pride; still nervous about the Conquering. Eventually, Istra would learn that Ilse is a kind Aesir and is remorseful about the Conquering, and they would eventually become wingsisters!

My WoF OTP. Tsunami and Riptide is definitely the best pairing to ever come out of Wings of Fire. I wish we got to see more of their relationship and how to grew over time.

I ship this with the same ferocity that I shop Moonbli (although I do ship it more than Moonbli). I enjoyed the whole forbidden love thing between Moonwatcher and Winter, since it seemed so realistic. I would have liked it better if this pairing became canon rather than Moonbli, but meh. The way that Winter fought with his feelings for Moon was so sad that I almost cried sometimes. This would have been a good pairing, but Moonbli is alright too.

Brambleclaw and Jessie is my Warriors OTP. I truly, truly dislike the SquirrelxBramble ship. I feel that Squirrelflight is much too childish, especially after the Hawkfrost Incident. Brambleclaw's father was a tyrant and tried to kill the clans and his sister left for ShadowClan. It was no wonder that he wanted to get close to Hawkfrost, after all they shared the same feelings. She should have been more understanding (not to mention she didn't even trust Brambleclaw about the secret of the three. When the Erins said that Squirrelflight didn't tell him because she wanted him to love the kits as his own, it makes it sound as if they're against adoption; saying that you can't love a child if they're not your own). On the other paw, Jessie is a fiery she-cat who challenges Brambleclaw. She isn't afraid to speak her mind, but unlike Squirrelflight, she doesn't act like she's better than everyone.

The Lorebrary: You're already here :P

Retrieved from "https://the-lorebrary.fandom.com/wiki/User:FlametheCharizard?oldid=16008"
Community content is available under CC-BY-SA unless otherwise noted.